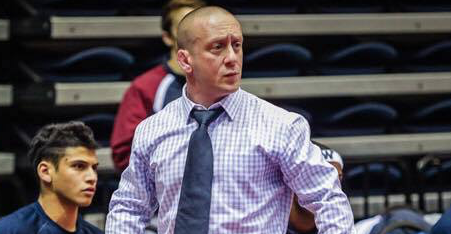 The man at the helm of a nationally recognized high school wrestling team, Adrian Tramutola, now earns the titles of Georgia’s Coach of the Year and Section 3 Coach of the Year from the National Wrestling Coaches Association.

Tramutola or “Coach T” is Woodland High School’s health and physical education teacher, head wrestling coach, and athletic coordinator. In his 13 years at WHS, the Woodland Wrestling Team has been named Team of the Year for All Sports in Georgia by USA Today. They also won seven state championships and seven runner-up finishes!

“Coach T instills in his wrestlers a championship vision that encompasses all components of the scholar-athlete,” said WHS Principal David Stephenson. “He is clear about the commitment level required to succeed at the highest level, and he continually reinforces the intangibles that contribute to championship-level success: practice, fortitude, scholarship, and character. He doesn’t allow himself nor his athletes to believe that they can do anything BUT be the best they can be if they commit and follow through on those intangibles.”

“This is a fantastic achievement and very well deserved,” added WHS Assistant Principal John Howard. “Coach Tramutola brings so much to the school by creating a championship atmosphere within his program. Students are inspired to be the best they can be, and the results speak for themselves. We are blessed to have him as part of the Wildcat family.”

Prior to starting at WHS, Tramutola moved from Miami, Florida, and attended the University of Tennessee at Chattanooga, where he earned a degree in Sociology and master’s in K-12 Studies. Tramutola taught in Cobb and Morgan counties before becoming a Wildcat.

As a Wildcat, Tramutola attributes his success to his students, parents, coaching staff, and administration.

“In the early years at Woodland, we were blessed with great parents that supported us relentlessly,” added Tramutola. “They worked around the clock to make sure our kids had every opportunity to be successful. We've also had a great coaching staff in place with one goal – coach the kids we have in our room every day and not focus on anyone or anything else. We have always had great support from our administration at Woodland, and they will go to bat for us anytime we need them. Its cliché in sports to say our team is like a family, but ask anyone that has ever been associated with our program, and they will tell you that is exactly what it is. In a sport as demanding, physically and mentally, and time consuming as wrestling, you must have 100% buy-in. Our kids know we will support them and be there for them in any aspect of their lives, and I truly believe that’s why they believe in us as coaches.”

The National Wrestling Coaches Association will officially present Tramutola’s awards in February prior to the Traditional State Tournament finals. Meanwhile, Woodland Wrestling starts in late October, and Tramutola expects the same level of success to carry into the 2021-2022 school year.

“We will do the same we do every year around that time and that's go to work!,” said Tramutola.