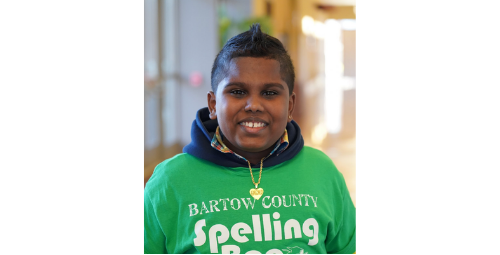 Eight simple words of wisdom; that is all it took to help 13-year-old Ethan Rollax do what no other Bartow County student has done before – win the Region Spelling Bee!

“My mom and my grandma told me this, ‘Forget about the past. Think about the present.’ And that is what I did,” said Ethan.

Ethan, an eighth-grade student at Adairsville Middle School, is a two-time District Spelling Bee winner. Last year, he competed in the regional competition, which was held virtually due to COVID-19 concerns. However, the outcome was not the one he was looking for.

“When I did the Region Spelling Bee on the digital platform last year, it had automatically submitted without me doing anything, with 15 minutes on the clock,” said Ethan.

2022 proved to be Ethan’s year, though, as he won the right to say he is now one of the top 20 spellers in the state of Georgia!

“After I finished, I just sat at my seat,” said Ethan. “I felt relief through my body, and I was hoping that I would win. When the time reached 10:42 a.m., my mom received an email and it said that I would do the State Spelling Bee. I was so happy, I felt like going outside and yelling out that I won!”

Success did not come without preparation. Ethan researched Scripps National Spelling Bee winners and the tools they used to prepare for competition.

Ethan is utilizing those same resources to prepare for the State Spelling Bee on March 18, 2022. It will be a virtual event once again.

“I feel amazed, but I won't make my amazement stop me,” said Ethan. “I feel like I can surpass the top 20 spellers.”

“Ethan is an excellent student who is driven by academics and LOVES the spelling bee,” added AMS Principal Tony Stanfill. “He works very hard in every class, and he strives for straight A's every year. I'll never forget how excited he was when eighth-grade students received their magnet program acceptance letters. He found me at 8:00 in the morning to let me know he had been accepted to all three programs! Obviously, he is a bright student, but really, it's his smile and positive attitude that make him such a great kid! He's so polite and happy every day, and if you've ever seen his smile, I don't have to tell you how contagious it is.”

The 2022 Scripps National Spelling Bee will take place at the Gaylord National Resort and Convention Center in National Harbor, Maryland, during the week of Memorial Day 2022.